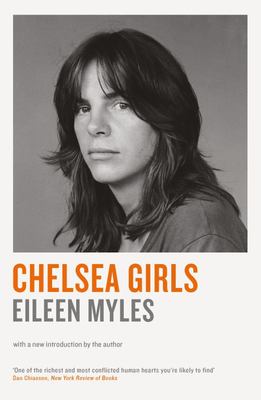 In this breathtakingly inventive autobiographical novel, Eileen Myles transforms her life into a work of art. Suffused with alcohol, drugs, and sex; evocative in its depictions of the hardscrabble realities of a young queer artist's life; with raw, flickering stories of awkward love, laughter, and discovery, Chelsea Girls is a funny, cool, and intimate account of how one young female writer managed to shrug off the imposition of a rigid cultural identity...Told in her audacious and singular voice made vivid and immediate in her lyrical language, Chelsea Girls weaves together memories of Myles's 1960s Catholic upbringing with an alcoholic father, her volatile adolescence, her unabashed lesbianity, and her riotous pursuit of survival as a poet in 1970s and 80s New York.

A groundbreaking and candid novel-in-real-time, considered a cult classic, from one of America's most celebrated poets.

An important and beloved radical icon of American letters, Eileen Myles has been described as 'one of the savviest and most restless intellects in contemporary literature'. She has published twenty books of poetry, art journalism, fiction, plays and libretti, and both she and her poems have recently appeared in the hit US TV series 'Transparent'. She is the recipient of a Guggenheim Fellowship in non-fiction, an Andy Warhol/Creative Capital Arts Writers' grant, a Foundation for Contemporary Art Grant, four Lambda Book Awards, the Shelley Prize, the Clark Prize for excellence in art writing and was named to the Slate/Whiting Second Novel List in 2015. Myles lives in Marfa, Texas, and New York. Visit her website at www.eileenmyles.com.