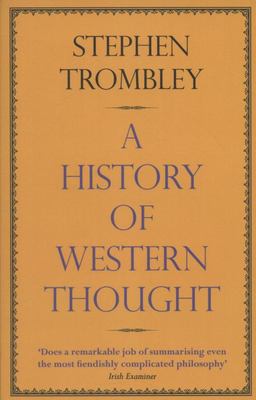 A History of Western Thought

Stephen Trombley's A History of Western Thought, outlines the 2,500-year history of European ideas from the philosophers of Classical Antiquity to the thinkers of today. No major representative of any significant strand of Western thought escapes Trombley's attention: the Christian Scholastic theologians of the Middle Ages, the great philosophers of the Enlightenment, the German idealists from Kant to Hegel; the utilitarians Bentham and Mill; the transcendentalists Emerson and Thoreau; Kierkegaard and the existentialists; the analytic philosophers Russell, Moore, Whitehead and Wittgenstein; and - last but not least - the four shapers-in-chief of our modern world: Karl Marx, Charles Darwin, Sigmund Freud and Albert Einstein. A History of Western Thought is a masterly distillation of two-and-a-half millennia of intellectual history, and a readable and entertaining crash course in Western philosophy.

Stephen Trombley is a writer, editor and Emmy Award-winning filmmaker. He collaborated with Alan Bullock on the second edition of The Fontana Dictionary of Modern Thought (1988), and was editor of The New Fontana Dictionary of Modern Thought (1999). His books include The Execution Protocol, Sir Frederick Treves: The Extraordinary Edwardian, The Right to Reproduce, 'All That Summer She Was Mad': Virginia Woolf and her Doctors and Fifty Thinkers Who Shaped the Modern World.