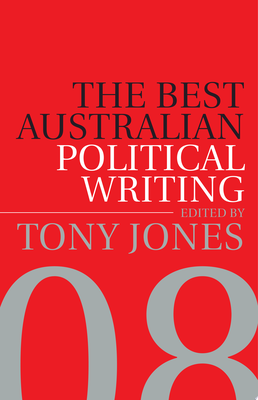 In The Best Australian Political Writing 2008, Lateline's Tony Jones selects the most illuminating, provocative and incisive analysis of the past year in politics. Here some of our leading commentators and writers dissect Kevin Rudd's march to the Lodge and John Howard's historic defeat; travel to Afghanistan and a drought-stricken Mallee town; weigh in on the culture wars; and investigate the bungled cases of David Hicks and Mohamed Haneef. This collection brings together the names, events and ideas that shaped a remarkable year. Noel Pearson delivers his most forceful argument to date on Indigenous policy; Pamela Williams chronicles the unravelling of the Liberal Party; Guy Rundle argues what's wrong with the Left; and Simon Mann charts the rise of a young technocrat in 'The making of Kevin Rudd'.

Tony Jones is one of the ABC's most respected journalists, with more than 20 years' experience in radio and television news and current affairs. Tony began hosting the award-winning news and current affairs program Lateline on ABC Television in 1999. He has received four Walkley awards, including two for Best Broadcast Interviewing in 2004 and 2007. He is also the host of a new program called Q & A, which will be broadcast on ABC Television in May 2008.