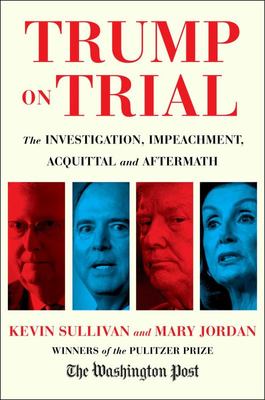 Trump on Trial - The Investigation, Impeachment, Acquittal and Aftermath

A compelling and masterful account, based on fresh reporting, of the investigation, impeachment, and acquittal of President Donald Trump, a ferocious political drama that challenged American democracy itself.

In the spring of 2019, Speaker of the House Nancy Pelosi did not favor pursuing Trump's impeachment. Her view was: "He's just not worth it." But by September, after a whistleblower complaint suggesting that Trump had used his office for his political benefit, Pelosi decided to risk it. The impeachment inquiry led to charges of abuse of power and obstruction of Congress, a gamble that ultimately meant Trump would be the first impeached president on the ballot in US history.

Pulitzer Prize-winning Washington Post reporters Kevin Sullivan and Mary Jordan have crafted a powerful, intimate narrative that concentrates on the characters as well as the dramatic events, braiding them together to provide a remarkable understanding of what happened and why.

Drawing on the deep reporting of Post journalists as well as new interviews, Sullivan and Jordan deliver a crisp page-turner with exquisite detail and scenes. They put readers in the room for both sides of the now-famous phone call between Trump and Ukrainian president Volodymyr Zelensky on July 25, 2019, revealing the in-the-moment reactions of those listening to the call in Washington, as well as the tension in Kyiv, as aides passed notes to Zelensky while he was talking to Trump.

Sullivan and Jordan deftly illuminate the aims and calculations of key figures. Pelosi's evolution from no to yes. Trump's mounting fury as "the I-word" became inevitable. Senate majority leader Mitch McConnell firmly telling Trump on the phone about the Senate trial: You need to trust me.

Trump on Trial teems with unexpected moments. House member Elissa Slotkin, a Michigan Democrat, alone at the National Archives, walking amid the nation's founding documents, weighing her vote on impeachment. Fiery Republican congressman Matt Gaetz of Florida, a favorite Trump warrior, deciding to lead the storming of the secure room in the US Capitol basement, where witnesses were testifying.

The authors paint vivid portraits of the men and women branded by the president's supporters as foes from the "deep state" Ukraine experts Fiona Hill and Lt. Col. Alexander Vindman; ambassadors Marie Yovanovitch and William Taylor. The narrative spools out amid Trump's nonstop tweeting and the infinite echo chamber of social media, which amplified both parties' messages in ways unknown during past impeachments.

Sullivan and Jordan, aided by editor Steve Luxenberg, follow the story into the aftermath of Trump's acquittal and the president's payback for those whom he believed had betrayed him. The retributions took place as the nation reeled from a devastating pandemic and widespread protests about racial injustice, with another trial looming: the 2020 election.